It is with great sadness that the EDA has learnt of the recent death of former President, Mr Jim E Banks.

Described by colleagues as,

“An industry man through and through with two loves, electrical wholesaling and golf”

Jim joined Russells Supplies Ltd in 1953. This independent wholesalers was established in 1942 and after 20 years with the company, Jim became Managing Director in 1973.

A natural networker, he was instrumental in Russells Supplies Ltd joining the NEDA buying group which later became one of the founding elements of ANEW.  This was seen as an immense achievement for Russells which was a relatively small two-branch business at the time and it took the company forward considerably. 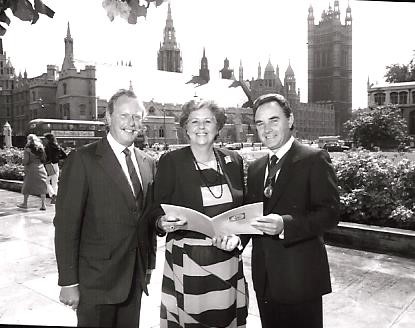 Jim on the right with Betty Bothroyd, now Baroness Bothroyd, former Speaker of the House of Commons.

The funeral will be on Tuesday 29 August 2017 and the arrangements are as follows:-

Myra and the family have said all are welcome to attend, all or any part of the days proceedings.

They have requested family flowers only, with donations to the British Heart Foundation.Donations should be sent to the Funeral Directors:-

Cheques payable to The British Heart Foundation, and please include a note of your name and how you knew Jim.