In June 2014 the EDA celebrated its centenary. To mark 100 years of service the Association held a VIP lunch in The Orangery at Kensington Palace. A commemorative publication ‘Celebrating 100 Years of Service’ was created to mark the occasion. To view a PDF copy of the publication. 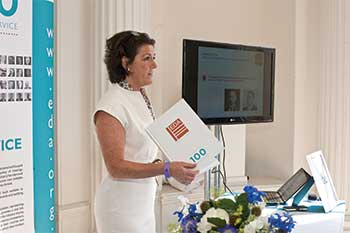 Our lovely day started in the morning with a press briefing, hosted by our Director Margaret Fitzsimons. Margaret talked about the history of the Electrical Wholesalers’ Federation (EWF) and the EDA, and what led us to this special day, in addition to ideas for the future and the next 100 years. The EDA Board of Management were also on hand to discuss their various roles

Once the press briefing was concluded our guests started to arrive and were greeted on the terrace by Ray Evans, our recently retired director and Margaret’s predecessor. Some guests mingled with their colleagues whist some took advantage of the opportunity to see the fascinating exhibit – ‘Fashion Rules’ being held at Kensington Palace, featuring dresses from HM The Queen, Princess Margaret and Diana, Princess of Wales.

Back at The Orangery, networking was in full force with chatter and laughter filling the sunny terrace. Cold drinks were served at a rate of knots to keep the temperature down and guests looked forward to lunch.

Once seated guests were welcomed by Simon Barkes (BEMCO), President of the EDA, and he looked just the part in his presidential gold chain. Michael Beswetherick, the official EDA historian and Past EWF President then followed with grace.

Lunch was a delight, and in such a stunning venue how could it not be?! As is tradition a raffle was held for the Electrical Industries Charity. Introduced by Pauline Cooke, President of the Electrical Industries Charity, the raffle raised just over £1,900. The prize, tickets to Old Trafford in the corporate hospitality suite, won by Geoffrey Barkes, past EWF President and formerly of BEMCO.

We had the Loyal Toast, kindly given by Steve Bratt, Chief Executive Officer of the Electrical Contractors Association, and after lunch was finished, Richard Shaw, Managing Director of GreenBrook Electrical, addressed the guests on behalf of affiliated members. Richard gave a wonderful speech and also became creative in his delivery and wrote a poem just for the occasion – thank you Richard.

Ray Evans concluded the lunch with a heartfelt speech and invited those that wished to continue networking the opportunity to do so in a neighbouring venue. We heard they all had a great time!

We were all honoured to be there for such a special day. Huge thanks to all of guests, including the past presidents that made the journey for a special trip down memory lane.