History of the Electrical Distributors’ Association

In June 2014 the EDA held a celebratory lunch at Kensington Palace to commemorate our centenary.

But where had it all started?

The first meeting of the EDA’s forerunner the Electrical Wholesalers’ Federation took place in February 1914.

The following text is an extract from the EDA’s centenary souvenir publication ‘Celebrating 100 Years of Service: the story of the Electrical Wholesalers’ Federation and the birth of the EDA‘.

To view a PDF version simply click on the image below. The EDA has some hard copies available and if you’d like to find out more please call us on 020 3141 7350. 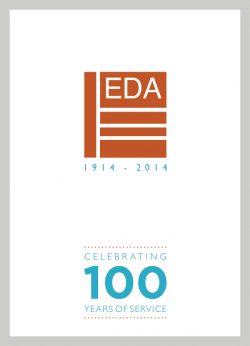 It was February 1914. A European arms race fuelled fears of impending war.

Typically, British politicians were divided on how to stop the race developing into a catastrophic European conflict.

On 4 February 1914, unfazed by the approaching conflict, five men of vision sat down in the office of the British Electrical Equipment Co Ltd in Norfolk Street, Strand, London, to discuss the formation of an ‘electrical wholesale Protection Society’.

This was against a background of a fast growing electrical industry and the widespread emergence of electrical wholesalers (‘factors’) to service the needs of contractors and retailers as well as large and small users and the consumer.

Competition between these companies was fierce (as it was with manufacturers who were dealing direct with trade, commerce and industry). What the wholesale trade lacked was unity and foresight.Manufacturers had already formed powerful trade associations to further their interests and enforce their trading conditions on the industry as a whole.

In 1901, electrical contractors had formed the ECA to represent their vital industry sector.It had become apparent to leaders of a number of prominent electrical wholesaling companies that something had to be done to unite their diverse fellow distributors and to form an association strong enough to fight the corner for their members in the face of the dictates of the authoritarian manufacturing organisations.

The enlightened men who put themselves forward to set up this association were: